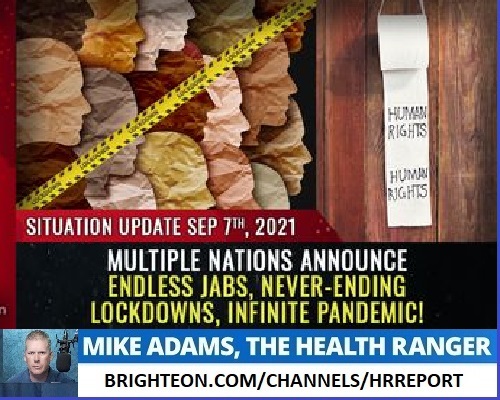 Alongside skyrocketing new “cases,” infections and hospitalizations among the fully-vaccinated, Israel has announced it’s going to start pushing a fourth covid shot, which it claims will accomplish what the third shot — and the first two shots — could never achieve: the eradication of covid.

This is, of course, the definition of insanity: Doing the same thing over and over again while expecting a different result. How compliant, exactly, will the Israeli people be, given that their ancestors were once marched into Zyklon B death camps under nearly the same demanded obedience to authority? The vaccine holocaust is somehow fully embraced by about 80% of Israelis, none of whom seem to realize they are exterminating themselves under a globalist depopulation agenda. (This is called “auto-antisemitism,” by the way.)

But Israel isn’t the only nation declaring a never-ending pandemic. In Australia, now home to the most outrageous medical dictatorship on the planet, Victorian Premier Daniel Andrews seems to have declared that unvaccinated people will be denied access to hospitals, doctors and health care services altogether. In his view, those who don’t take the vaccine should be cut off from civilization and denied everything, including groceries, health care services and presumably all forms of transportation.

Those world citizens who were gullible enough to go along with the initial requirement of taking two shots to be “fully vaccinated” are now finding themselves caught in a vaccine trap from which there is no escape. With each booster shot weakening their immune response, the consequences of obedience increasingly look like suicide. And the most obedient vaccine takers are setting themselves up for a high risk of death from future variants or outbreaks… which seems to be the whole point in all this.

Unless the people of the world peacefully rise up and reject the authoritarian nonsense, they will be subjected to a never-ending medical police state under the guise of a plandemic that perpetuates itself as fully-vaccinated individuals produce and shed highly infectious viral variants that keep killing people. As you might suspect, all blame will be placed on the unvaccinated, who are the scapegoats for this global depopulation biological weapons deployment.

In my Situation Update podcast, I compare Australian health chief Dr. Kerry Chant to the Urukai (high-level orcs or something) born out of the mud pits of Isengard. And Daniel Andrews is a lot like Gollum from Lord of the Rings, bashing juicy fish against the rocks so he can feed off the death and suffering of others while pursuing his evil aims involving total power to control others.

There are also references today to Darth Vader, the Empire, Jedi warriors and a light saber duel between forces of good and evil. Enjoy!