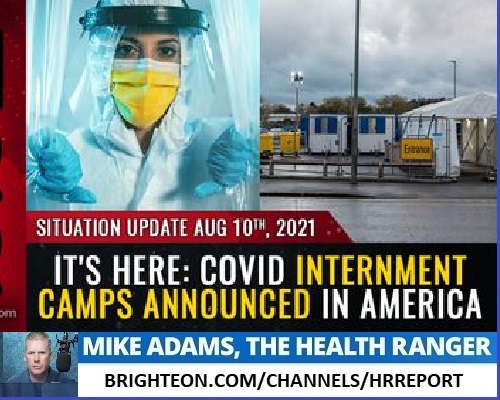 The vast majority of (oblivious) Americans have dismissed all this as a “conspiracy theory,” and now they’re shocked and frightened by the realization that covid internment camps are being actively deployed across America.

On Friday, Tennessee Gov. Bill Lee signed Executive Order 83, which authorizes National Guard and State Guard troops to break into peoples’ homes, kidnap them at gunpoint, and take them to covid internment camps, all without any due process or respect for civil rights. Individuals can be targeted for this medical kidnapping by armed troops via “telephone assessments,” and the medical kidnapping of American citizens is being labeled “involuntary commitment” to “temporary quarantine and isolation facilities.”

In other words, FEMA-style concentration camps are here, and covid is the excuse for mass arrests and executions of Americans.

These are, of course, death camps being constructed and operated under the cover of the covid plandemic, which we have exhaustively shown is rooted in junk science fraud and media psychological operations.

The Tennessee EO is on top of the CDC’s announcement that covid camps will be set up on a nationwide basis, with people being medically kidnapped and taken to “humanitarian settings” where they will be forced into labor pools, just like a scene ripped right out of Nazi Germany.

The average American, upon learning that concentration camps are now being authorized in the United States, is expressing shock and disbelief that this so-called “conspiracy theory” turns out to be official government policy. As reported by WorldNetDaily.com, social media users are responding with comments like:

Wow! The guard will be utilized? Involuntary commitment? And construction of quarantine and isolation facilities? Thought all of that was just a silly conspiracy theory.

The pieces add up to a very scary picture!! People need to wake up…

In truth, the US government has already demonstrated that it is able and willing to round people up at gunpoint, deny them all civil rights or due process, and throw them into death camps for an indefinite duration. They did this very thing in World War II to Japanese Americans who had committed no crime and did nothing wrong. Yet they were rounded up and thrown into what essentially became death camps, all because of their ethnicity.