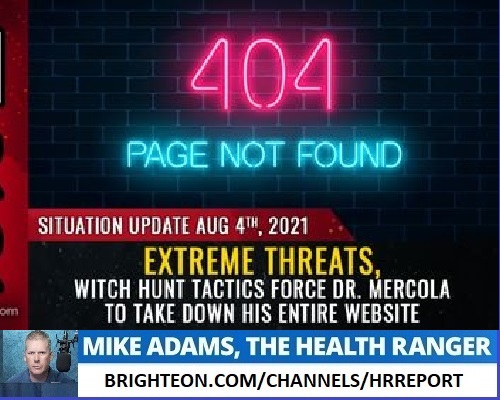 Uncensored, & Commercial Free
He is helping to create a better world.
Bypass censorship by sharing this link: http://realnews.ws/update-8-04/

Biden’s WAR on America: Target the nation’s “human infrastructure” with mandatory, deadly gene therapy injections to mass murder all those who keep the country running.

Big Pharma’s media lackeys — “journo-terrorists” — have struck again, this time unleashing a wave of death threats and vitriol against Dr. Joseph Mercola of Mercola.com, who just announced he’s been forced to take down his entire website of articles and interviews. His work represents 25 years of research and writing about nutrition, wellness, disease prevention and natural immunity, and the taking down of his site is no doubt being celebrated by the pharma-funded criminals who are conspiring with Big Tech and the White House to target and destroy the most influential educators on nutrition and wellness.

This is nothing less than a war against humanity, all justified under the cover of “covid,” a faked plandemic that’s so fake, no laboratory in America can yet produce an isolated reference material standard of covid-19 viral particles that are proven to sicken anyone. The entire thing is a deliberate sham, engineered to push toxic vaccines and a global depopulation agenda for planetary-scale extermination of billions of human beings. But to carry out this mass extermination, they can’t have people like Dr. Mercola teaching the public about vitamin D or ivermectim, for example, since natural immunity is relatively easy to enhance with simple nutrition. (And covid-19 kills almost no one by itself, which is why Cuomo needed to use ventilator-assisted medical murder to pump up the death statistics in New York.)

Under the cover of covid, many of today’s so-called “journalists” have become terrorists, waging hate-motivated campaigns against targeted individuals — the “dirty dozen” — that involve threatening their employees and family members. Their goal is simple: Intimidate and destroy anyone who stands in the way of the global vaccine depopulation agenda. No human must be left unvaccinated in the short term, or left alive in the long run, they believe. In an age where “online bullying” is supposed to be a crime that’s condemned by all, the NYT, Washington Post, CNN, NBC News and other pharma-funded media outlets have become the most outrageous and aggressive bullies of all, issuing a relentless barrage of false, defamatory smear articles that are clearly designed to whip up irrational hatred and violence against their intended targets such as Dr. Mercola.

If the FBI or DOJ really wanted to investigate actual domestic terrorism in America, they should start by investigating NBC News, the NYT and other journo-terrorism organizations that are knowingly whipping up hatred and threats of violence against health educators like the Bollingers, or Sayer Ji, Del Bigtree and RFK, Jr. Yet there will be no such investigations for the obvious reason: The Biden regime is a pharma-controlled medical dictatorship and criminal racketeering / organized crime syndicate that launders money through covid payouts (for vaccines, stimulus money, etc.) to pay off top pharma donors who also prop up the media propagandists with Big Pharma advertising money. It’s all a racket.

The threats against Dr. Mercola are so intense that he has now been forced to delete his entire website of content, spanning 25 years of articles and interviews, many of which are widely cited by other publishers due to the meticulous fact-checking that Mercola.com employs. Dr. Mercola is almost obsessed with accuracy, and his articles are extremely well researched and cited, unlike the vaccine-pimping media “journalists” who merely read teleprompters and repeat whatever pro-pharma propaganda is placed in front of them on any given day.

The mainstream media now functions as the authoritarian propaganda branch of Big Pharma. Even worse, they run “black hat” operations to attack, smear, defame and deplatform anyone who won’t go along with their anti-human, anti-America lies and propaganda. We are now living under a medical dictatorship in America, with the Mayor of New York City now declaring that unvaccinated people are a new sub-class of humans who shall be denied access to restaurants, gyms and bars, with grocery stores no doubt soon to follow.

I thought America had already decided as a nation that declaring one group of people to be a sub-human class of degenerates was morally wrong, yet the unvaccinated have now become America’s new class of shunned sub-humans, with governors, mayors and even the President now openly encouraging bigotry and discrimination based on who you are.

Vaccine passports are the new “slave papers,” warned the Democrat Mayor of Boston, a black woman who is now warning of what happens in society when one group of people demands segregation and denial of services based on some dividing attribute.

In America today, thanks to the limitless evil of the medical dictatorship now in power, people who choose to rely on natural immunity will be discriminated against and denied access to basic services while those who attempt to educate the public about nutrition and wellness will be demonized, vilified and likely soon attacked by angry, hysterical mobs whipped into a state of intense anger by the journo-terrorism media. Read more about all this at MedicalFascism.news.

This has gone too far. All those pushing this discrimination, bigotry and hate campaign attacks against nutrition educators need to be arrested and charged for their own role in these coordinated crimes against humanity.

And Dr. Mercola should sue the NYT for $1 billion in damages for their false, defamatory smear campaign against him.