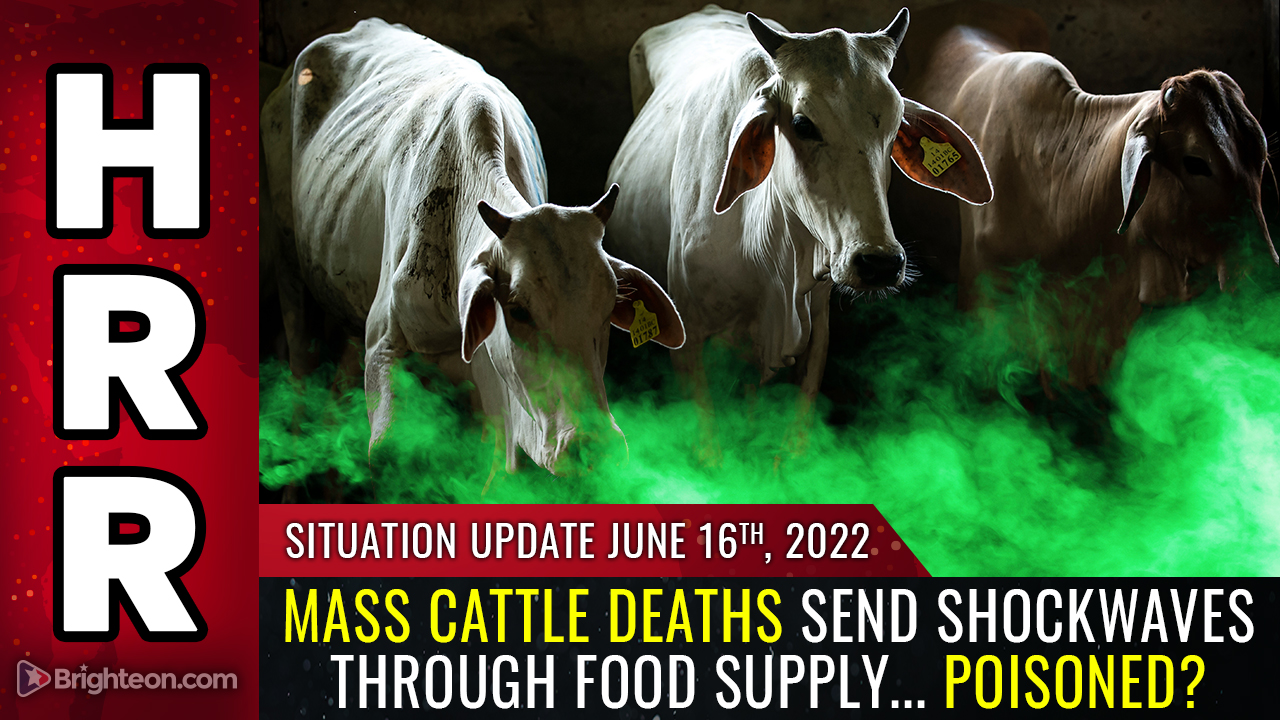 Mass CATTLE deaths send shockwaves through food supply as speculation rises: Are they being poisoned on purpose?

This article may contain statements that reflect the opinion of the author.

(Natural News) Following over 100 fires that appear to be acts of sabotage against food facilities across the United States, speculation is now running rampant about thousands of cattle that appear to have died suddenly in Kansas over the weekend. According to the corporate media which also claims all covid vaccines are “safe and effective,” these sudden mass deaths are the result of heat. Yet cows are incredibly resilient and frequently endure the same temperatures that the Midwest is experiencing right now. Why are thousands of cattle apparently dying so suddenly? AgDaily.com, like the rest of the conventional media, says the deaths were caused by a combination of heat, humidity and lack of wind. CNBC is also reporting that the The Kansas Department of Health and Environment agrees with this assessment. Yet I am personally near hundreds of head of cattle in central Texas where temperatures are the same (and the days are even longer this time of year due to the more southern latitude). I see Longhorn cattle, Angus, Blanco and other breeds abound in Central Texas, yet I don’t see thousands of cattle dropping dead anywhere.

Digging into this issue further, I called one of my friends who owns several hundred head of cattle. He was already aware of the Kansas “mass death” event and had been discussing it with other cattle owners. I asked him if he believed the media story that all these cattle suddenly died from heat exposure. His answer? “I doubt it very seriously that so many would drop dead all at the same time,” he told me. “In a heat-related incident, they wouldn’t all drop dead at the same time. You would see a few dead at a time, scattered across the herd, but not so many deaths all at once.” When I asked him if he thinks these are natural deaths or something more like sabotage, he said, “I’m thinking it’s something nefarious.” Bovine epidemics can also cause large-scale simultaneous death, but no one is claiming these are bovine epidemic deaths. So that leaves only a couple of possibilities in the realm of sabotage: 1) Poisoning of the water, 2) Directed Energy Weapons (DEW). This is on top of over 100 documented cases of arson sabotage of food facilities across the USA. Our research staff has put together the full details on each of these (date, location, facility name, description of the fire incident) and we will be publishing this new, updated list soon.

The deliberate take down of the economy and the food supply

What many Americans are waking up to now is the reality that our own government is at war with We the People. They are deliberately destroying the energy infrastructure and obliterating the economy. They are crashing asset markets and utterly destroying the future viability of pensions. And now, it’s clear they’re taking down the food supply chain on purpose, thrusting the American people into food scarcity, food inflation and real famine. It seems as if the illegitimate Biden regime — which was never actually elected into power — wants to create nationwide riots before the mid-term elections so they can justify a declaration of martial law or some other national emergency. They need something big to break so they can try to cancel the elections or force nationwide mail-in voting so they can steal the election results yet again (like they did in 2020). With each passing day, they tear down something else that keeps the economy running: Pipelines, international trade, railroads, infant formula manufacturing, etc. Week after week, the food collapse intensifies while food prices skyrocket. The end result is abundantly obvious: Widespread food scarcity combined with sky-high prices that few will be able to afford. And then on top of that, the question now emerges: Are they deliberately running out and mass murdering cattle, too? We know the Biden regime is run by insane, criminal lunatics who despise beef and ranching operations, but are they really willing to go that far to create a food crisis and try to suspend the elections? Of course they’re that crazy. They’re Democrats, the party that celebrates murdering their own children after they’re born. Mass murdering cows is nothing to them. In fact, a recent poll shows that nearly half of young male democrats believe that assassinating a politician is completely okay. This poll, astonishingly, was carried out by the left-wing SPLC. As the Daily Caller reports: Forty-four percent of the “younger Democratic men” surveyed in the Southern Poverty Law Center (SPLC) poll approved of “assassinating a politician who is harming the country or our democracy.” That was the highest rate of any gender, party and age combination. Remember, these same left-wing fascists believe that carbon dioxide is killing the planet. Thus, they have no problem justifying mass murder of animals or humans as long as they believe it “saves the planet.” California, run by these same death cult Democrats, has just approved an actual infanticide bill that legalizes the murder of a perfectly healthy child up to 7 days after birth, reports Charisma News. So yes, these same people who gladly murder their own children and who justify murdering political opponents would not hesitate for a second to mass murder cattle if it meant creating a food crisis that leads to the chaos they want. Nobody is surprised anymore at the evil of the Democrats. They will do absolutely anything to try to stay in power, which is exactly why we must work overtime to remove them from power. Get more details on all this — plus new analysis on the financial collapse that’s under way — in today’s Situation Update podcast: Brighteon.com/6cba8d45-bca2-4dfd-adf2-29093b5d422f