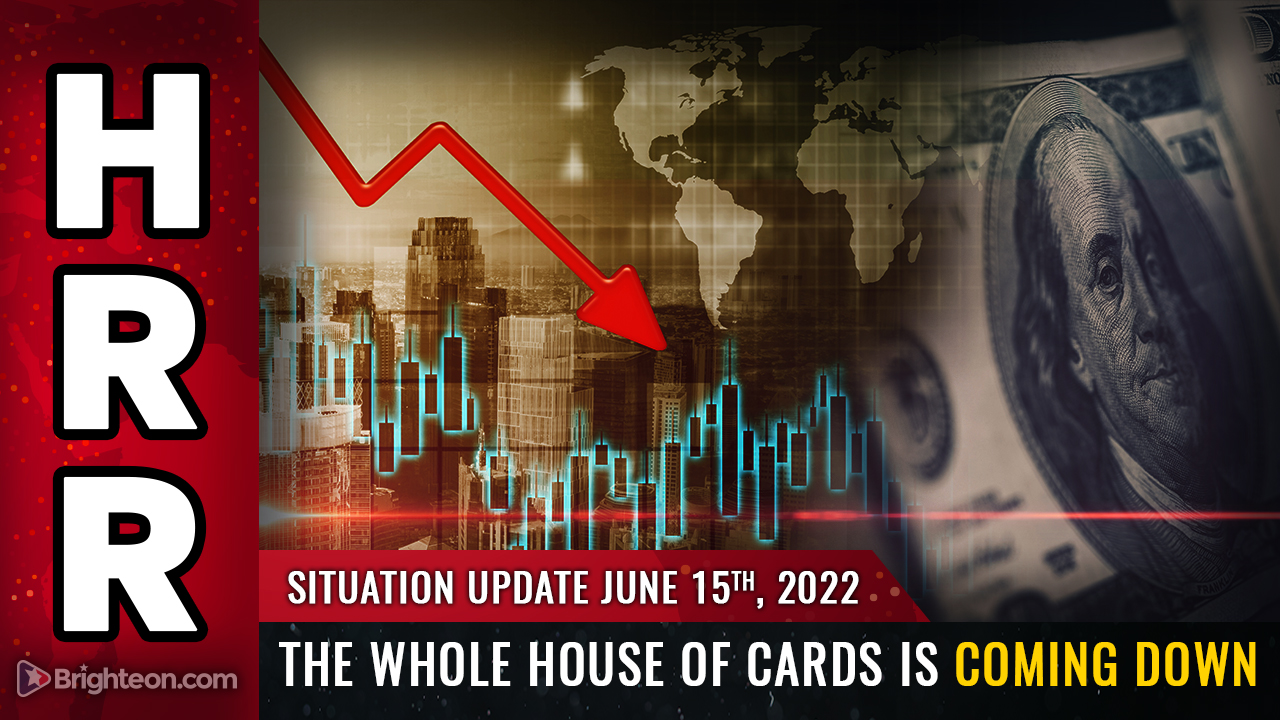 STOCKS, BONDS, CRYPTO and REAL ESTATE: The whole house of cards is coming down.

(Natural News) The Fed raised interest rates by 0.75% today (75 basis points), fulfilling their promise to attempt to reverse the runaway inflation that they caused in the first place by printing trillions of dollars and flooding the markets with cheap or nearly-free funds (zero percent interest rates, for example). As of right now, America’s real estate bubble is now in the process of a catastrophic collapse. The stock market is collapsing and the crypto universe is absolutely imploding. “The crypto apocalypse is here,” writes Michael Snyder from End of the American Dream: Over the last seven months, we have witnessed a cryptocurrency collapse that is so epic that it is truly difficult to put it into words… approximately two-thirds of the value of all cryptocurrencies has already been wiped out.  Some are calling this a “crash”, but the truth is that this is the sort of full-blown “collapse” that so many have been warning about for such a long time.  A lot of crypto investors are now deeply in the red, and the outlook for the months ahead is very bleak. Meanwhile, the average stock portfolio is down 31% this year alone, and the downside still remaining now looks like a deep, ominous chasm of financial devastation that’s going to suck the vast majority of American into financial destitution. You see, while everybody’s assets are plummeting, the prices of the things they need to buy keep skyrocketing. Everything people own is going to collapse in value, while nearly everything people buy is going to double or triple in price. The real estate bubble will now collapse, however, which may offer some relief for those trying to rent or purchase new homes. But for the tens of millions of people already locked into bubble-priced mortgages and rent contracts, the pain of paying too much won’t be easily reversed. The truth is that most assets have been Ponzi schemes for many years or even decades. The stock market hasn’t operated from fiscal reality since the 1980s, and the fiat currency dollar has been living in a delusional fairy tale land since Nixon took it off the gold standard in 1971. The real estate asset price explosion was just an expression of low interest rates and cheap money, while the crypto universe was a grand social experiment that primarily served as a new generation’s “dot com bubble” where they ultimately learn an expensive (but valuable) lesson in the seduction and false promise of seemingly becoming wealthy without work. Too many crypto pioneers thought they could recreate the laws of economics by simply claiming absurd things that aren’t true, like “we don’t need intrinsic value, our token is backed by an algorithm.” That’s the crypto equivalent of the biological fantasy that claims “men can get pregnant,” which is why I call the crypto Ponzi schemes “financial transgenderism.” See, what we’re all really beginning to experience in the world right now is a heavy dose of reality. Learn more in today’s Situation Update: Brighteon.com/e450a1bf-8a5e-433b-aed5-7839e4210c19