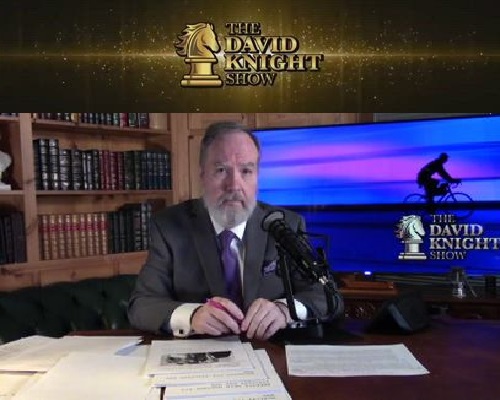 Your Host, David Knight.
Dave’s Analysis & Reports of the News.
Bypass censorship by sharing this link.

1:57 What was behind yesterday’s massive failure of 33,000 websites including giant corporations. And, a surprise resolution of the Kaseya ransomware attack that remains a mystery

17:39 A radical new battery technology that could make renewable energy practical for the grid? EVs won’t be able to use it but govts are banning other cars by 2030 and another automaker announces they will only make EVs.

27:34 Congressional Democrat makes it clear that the Jan6 “Insurrection” narrative “nothing is off limits” including Trump.

35:11 A letter from Joe Biggs on how Democrats treat their political prisoners after denying a speedy trial.

39:50 Democrats make it clear they want a Civil War. Washington Post superimposes a map of Yugoslavia, torn apart by ethnic fighting, over map of USA and here’s what they mean by it.

1:10:06 INTERVIEW Gerald Celente: The “Delta Dystopia”, Trends in Tyranny. TrendsResearch.com Banks leveraged buyout and hostile takeover of housing (and everything). Will Americans come together to resist?

2:06:09 Bill to Let HHS Decide “Misinformation” and Censor. Amy Klobuchar, presented during the Presidential primaries as a “moderate” Democrat, introduces a bill to make HHS the sole and final arbiter of medical information that is allowed to be discussed.

2:12:34 Wouldn’t you want MORE research & opinions if it were a REAL pandemic? Authoritarian dictates and censorship are not just the death of liberty and the rule of law — dictates, not debate. It’s the death of the scientific method and medical care.

2:23:13 AP Myth: NO Data Supports “99% Deaths from Unvaccinated” Baseless claim from one article, thrown into the echo chamber of endless repetition by politicians and other media.

2:51:35 Vaccine, Blood Clots — Loss of BOTH Legs, BOTH Hands Horrible vaccine adverse effects dismissed as coincidence but her husband has some pointed questions for the liars whose story just doesn’t make sense.