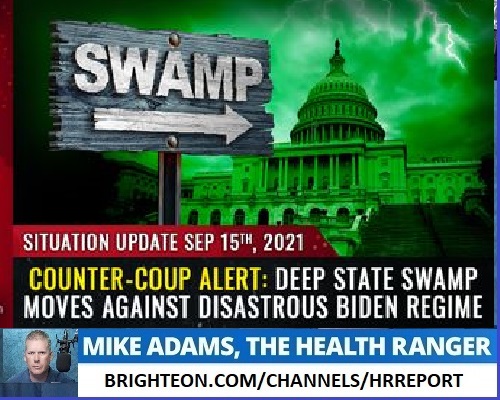 COUNTER-COUP: Deep state swamp moves against disastrous Biden regime as swamp creatures realize the whole country could burn down if they don’t stop the madness.

Today’s article and podcast focuses on a theory that says the deep state swamp is now turning against the Biden regime (and its traitorous operators like Gen. Milley) after realizing if they don’t stop the destruction, they will lose all their power, salaries, benefits and kickbacks as the U.S. empire collapses.

All of a sudden, people deeply embedded in the Pentagon, the CIA, NSA and even the FBI are coming to the realization that the Biden regime really is working for communist China, and the CCP’s ultimate goal is the complete destruction of the United States of America (along with the CCP-ordered executions of all the former high-level officials in the US government).

That would destroy the entire power structure of the U.S. deep state and leave all its current players with no clout, no money, no power… nothing. They would, in fact, be among the very first to be targeted and executed by the communist Chinese once China seizes control over the United States via military occupation.

Suddenly, it seems, the swamp is fighting for its own survival, in much the same way that parasitic ticks sucking blood off a dog don’t want the dog to die. Even parasites, sooner or later, realize they need the host to keep living or they all perish together.

The recent exposing of Gen. Milley and the obvious public positioning of Biden as an incompetent dementia patient are all part of a process, we now believe, to expose and remove the most cancerous anti-American elements that have infested the Pentagon, White House and Congress. Nancy Pelosi’s name is probably on that same list, as she is clearly revealed as complicit in Milley’s treasonous plot to overthrow the Trump administration and follow the bidding of communist China.

If the US can’t project global power, the US dollar will lose its global reserve currency status

I’m not claiming the suddenly-red-pilled swamp creatures are “good” guys, but rather that their own survival now requires them to prevent the United States of America from being completely subsumed by a foreign enemy. The very existence of the swamp depends entirely on the continued functioning of the fiat currency dollar, and the money printing machine can’t function unless the United States government both exists and is able to project power around the globe.

Biden’s disastrous handling of the collapse of Afghanistan proved to anyone paying attention that with Biden at the helm, taking orders from Obama and China, America’s petro dollar dominance will soon come to an end.

When that happens, the magical money printing machine grinds to a halt, and the gravy train spontaneously ends. No more free money for the politically connected. No more kickbacks, bribes and money laundering to weapons manufacturers who have been feeding at the war trough for generations.

Thus, I believe a plot is under way right this very minute to remove Biden from power and root out the worst traitors in the Pentagon who are conspiring to see America gutted.

A tipping point has been reached.

This isn’t to say that these forces necessarily want Trump back in power, but Trump did keep the Pentagon extremely well funded, providing endless billions to the ranks of military contractors, weapons manufacturers and “consultants” who skim kickbacks off the entire process. Right now, practical people inside the Pentagon would vastly prefer Trump to Biden, since Trump made the military look strong and well-funded while Biden makes everybody look like impotent fools. All the left-wing wokism in the military isn’t helping, either.

In the coming months, do not be surprised if elements of the military move against the criminal Biden regime. Don’t be shocked if top Pentagon officials get court-martialed. Now that the incompetence and treasonous actions of the Biden actors have placed the very existence of the United States at risk, those money-grubbing deep staters who depend on the continued debt-based gravy train are going to crack whatever skulls they need to crack in order to keep the money flowing. This is gang warfare, after all, played out on the national stage.

You might also think of this as a civil war inside the Pentagon, where certain elements of the armed forced that had previously been opposed to Trump are now realizing Biden represents an existential threat to their very survival. Trump may have tweeted “mean” things, but Biden threatens to burn down the entire system from within. And that can’t be allowed, or everybody loses.

What they all fail to understand, of course, is how quickly the endless money printing is going to break the entire system anyway. With the total collapse of the dollar likely just around the corner, the Fed’s money printing scheme is rapidly coming to an end, and that means the gravy train will be slamming shut for the whole system. The vast bog of swamp gas will be ignited like a giant fuel-air explosive, and those who once thought the swamp would be their home will quickly realize it’s actually their grave.