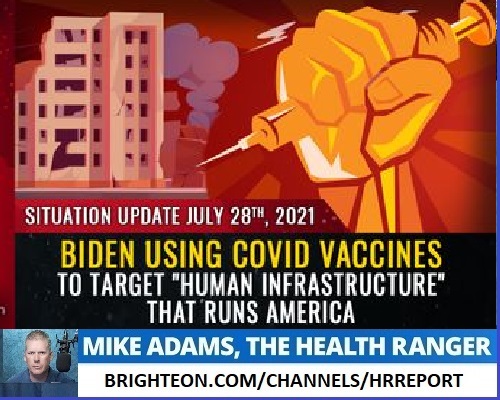 Your Host: Mike Adams.
He is helping to create a better world.
Bypass censorship by sharing this link: http://realnews.ws/situation-7-28/
Uncensored, & Commercial Free

Biden’s WAR on America: Target the nation’s “human infrastructure” with mandatory, deadly gene therapy injections to mass murder all those who keep the country running.

China’s strategy for defeating America and occupying North America rests on taking down America’s ability to respond to emergencies or defend itself against attacks. At first glance, a casual observer might think that obvious infrastructure targets might be America’s power grid, telecommunications infrastructure or fuel refineries, but a far more critical piece of infrastructure that’s often overlooked is the “human infrastructure.”

Human infrastructure refers to the people that run the components that keep America functioning. It’s the people at the coal plants, the naval officers on aircraft carriers, the men running the oil drilling rigs and the technicians at nuclear power plants. It’s also the doctors and nurses at hospitals and the hundreds of thousands of first responders who deal with emergencies and catastrophes.

Joe Biden is now expected to announce as early as tomorrow that all federal government workers will be forced to accept experimental gene therapy injections that are falsely labeled “vaccines.” In addition, the DOJ just declared it “legal” for all private companies across America to force their own employees to take these dangerous, deadly jabs, even without FDA approval or any legitimate long-term safety or efficacy data.

It should be obvious to everyone that nearly every person who runs America’s infrastructure either works for the government or works for private sector businesses. Almost no one involved in running America’s critical infrastructure operations is self-employed.

Thus, Joe Biden’s announcement that all public and private sector workers across the country can be forced into dangerous, experimental gene therapy injections is nothing less than a declaration of war against America’s “human infrastructure.”

Mandatory “vaccines” are an act of war against America

This is not an accident. This is Joe Biden taking orders from Barack Obama and the CCP, both of whom want America to be taken down and dismantled. Attacking the people who run America through a scripted, engineered biological weapons injection scheme is a wartime tactic to achieve that goal.