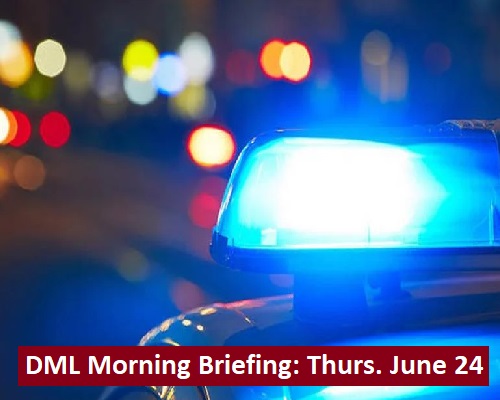 Today is June 24 and I am Dennis Michael Lynch. Below are my opinions on the stories grabbing headlines this morning. I hope you share this briefing as doing so will make you the smartest person in the room, in my opinion.

1 – Massive Search and Rescue Effort Underway After Partial Collapse of Miami Condo Building
NBC Miami reports: At least one person was killed and a massive search and rescue effort was underway following the partial collapse of a 12-story condominium building in Surfside early Thursday.

The collapse sent a cloud of debris through the neighborhood, coating cars up to two blocks away with a light layer of dust. Footage from the scene showed a large section of the sea-view side of the building collapsed into a pile of rubble.

It was unknown exactly how many people were injured or were inside the building at the time of the collapse but Burkett said at least 10 people were treated at the scene. Officials at nearby Aventura Hospital said they had received three patients from the scene. Two were in critical condition.

“The building has literally pancaked, it has gone down, and I mean there’s just feet in between stories where there were 10 feet,” Burkett said. “That is heartbreaking because it doesn’t mean to me that we’re gonna be as successful as we would want to be to find people alive.”

DML: This is horrific. Unspeakable.

2 – Joe Biden Threatens Gun Brokers’ Licenses Who Willfully Sell Guns that ‘Commit Violent Crimes’
Breitbart reports: President Joe Biden delivered Wednesday’s remarks on the administration’s strategy to prevent gun crimes across the country when he issued a stark warning for gun brokers who have willfully sold guns to people who are not authorized to own one and are used to commit violent crimes.

He continued to say the Justice Department also announced a “major crackdown to stem the flow of guns used to commit violent crimes.”

The Biden administration under Biden will have a “zero tolerance for gun dealers who willfully violate key existing laws and regulations.”

He continued if a gun broker is going to willfully sell a gun to someone that is prohibited from owning a gun, in addition to “willfully fail to run a background check” or “willfully falsify a record or fail to cooperate,” the Biden administration will come after the broker.

3- Biden wants to slash National Guard force size despite busiest year since WWII
Fox News reports: The National Guard deployed more troops during 2020 than any time since World War II a top general said Wednesday, but White House budget cuts would mean a decrease in troops for the fiscal year 2022.

“Some states had a significant increase in the amount of [operational tempo] that they had previously had, and so they’ve asked for additional force structure,” General Daniel Hokanson told reporters during a Wednesday press event. “Those decisions are made at the Secretary of the Army and Secretary of the Air Force level.”

The White House’s defense budget proposal, released late last month, called for a slight increase in the $715 billion budget, but it would also cut military forces by about 5,400 personnel – 500 of whom come from the National Guard.

DML: More of the weakening of American military.

4 – Iowa Teacher Goes On Wild Rant About Not Being Able To Teach CRT
The Daily Caller reports: Several TikToks from an Iowa teacher went viral on Wednesday in which she ranted about not being able to teach Critical Race Theory (CRT) and being forced to say the Pledge of Allegiance before school.

Megan Geha, a special education teacher at Des Moines East High School who goes by the name “Ms. Magoo” on TikTok, voiced her displeasure at the law Republican Iowa Gov. Kim Reynolds signed on June 8 prohibiting the teaching of CRT in schools.

DML: This is the very reason conservatives need to start running for school board.

5 – Pelosi: Republicans ‘Can’t Win’ Unless They ‘Suppress the Vote’
Breitbart reports: During a portion of an interview with theGrio released on Wednesday, House Speaker Nancy Pelosi (D-CA) stated that Republicans are blocking federal election legislation “Because they can’t win any other way. They can’t win any other way. So, they have to suppress the vote.” And compared the situation to the Battle of Trenton during the Revolutionary War.

TheGrio D.C Bureau Chief April Ryan said, “The reality, you just brought up the Republicans, Mitch McConnell is leading the effort saying, no, no, no to voting rights.”

DML: Pay careful attention to the narrative they’re pushing here:  “Republicans can’t win any other way… so they have to suppress the vote.”