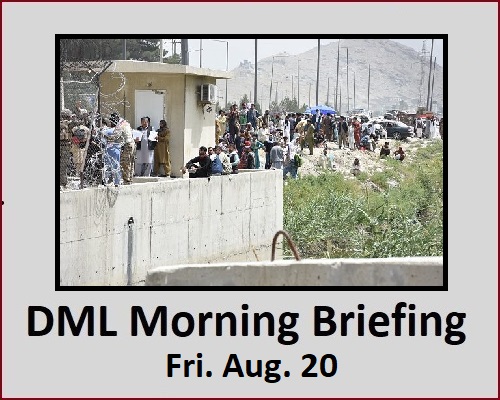 1 – Biden will give White House speech on Afghan fiasco at 1pm today
The Daily Mail reports: Joe Biden will address the nation for the second time in a week on Friday, in what the White House say will be an update on evacuations of Americans and Afghan translators from Kabul.

The president gave a speech of quiet fury on Monday to defend his decision to withdraw, blaming Donald Trump and the Afghan army for the swift defeat to the Taliban.

But pressure has piled on the administration in the days since from across the political spectrum as scenes of utter despair and chaos from Kabul airport have been beamed around the world.

Biden’s refusal to accept that multiple intelligence agencies had predicted such a disaster and his suggestion of cowardice on the part of the Afghans, has left allies questioning the reliability of the United States.

DML: Another bumbling speech coming right up. Meanwhile, desperate parents outside the Kabul airport are passing their children over the wall to U.S. soldiers.  This is all on you, Joe Biden!   WATCH BELOW:

2 – CNN continues hammering Biden over Afghan turmoil: ‘If this isn’t failure, what does failure look like?’
Fox News reports: CNN has continued offering critical coverage of President Biden amid his administration’s turbulent military withdrawal from Afghanistan.

Clarissa Ward, CNN’s chief international correspondent who’s been reporting from Kabul, called what she’s witnessed an “absolute mess” and offered a stunning rebuke to Biden’s claim to ABC News that the pullout of troops out of Afghanistan which quickly resulted in a takeover by the Taliban was not a “failure.”

“I think a lot of people outside that airport, particularly those taking the kind of extreme actions we’re just talking about would like to know if this isn’t a failure, what does failure look like exactly?” Ward asked Thursday.

Later in the day, CNN’s counterterrorism analyst Phil Mudd went off on the State Department for failing to say how many Americans are left in Afghanistan.

“That was unacceptable,” Mudd reacted. “I’m not interested in hearing a U.S. Government spokesperson talk about how unprecedented this is with other U.S. presidents and how other presidents didn’t have to deal with this.”

DML: CNN, you are the ones who wanted this guy in the White House!  And here’s another from MSNBC:

3 – Under pressure, State Dept. scraps plan to bill Kabul evacuees $2K for flights
The New York Post reports: The State Department was forced to scrap a widely excoriated plan to bill US citizens $2,000 or more for their evacuation flights from Kabul.

The hefty price tag drew social media outrage Thursday after it gained public notice. The cost was publicly posted to a State Department website on Saturday but went largely unnoticed before it was highlighted by Politico’s military-focused newsletter Thursday.

An unnamed State Department spokesman initially stood by the charge, telling Politico that “U.S. law requires that evacuation assistance to private U.S. citizens or third country nationals be provided ‘on a reimbursable basis to the maximum extent practicable.’”

The State Department’s Overseas Security Advisory Council said in an Aug. 14 advisory, “U.S. lawful permanent residents may submit a repatriation assistance request, and their request will be considered depending on availability.”

The advisory says, “Repatriation flights are not free, and passengers will be required to sign a promissory loan agreement and may not be eligible to renew their U.S. passports until the loan is repaid. The cost may be $2,000USD or more per person.”

“In these unique circumstances, we have no intention of seeking any reimbursement from those fleeing Afghanistan,” State Department spokesman Ned Price said in a statement provided to The Post.

DML: What an absolute outrage!

4 – University trains students that Christians, White males are ‘oppressors’
Fox News reports: James Madison University in Virginia is training student employees to recognize that people who identify as male, straight, cisgender, or Christian are “oppressors” that engage in the “systematic subjugation” of other social groups.

According to documents obtained by Fox News, student employees in charge of facilitating orientation for first-year students this fall at JMU underwent training in recent weeks to learn about social justice and inclusion.

The JMU training materials listed the various races and nationalities they considered “privileged” or “agents” and those they characterized as “oppressed” or “targets.” Among the privileged, according to the presentation, are people who identify as male, cisgender, heterosexual, heteroromantic, Christian, White, Western European, American, upper to middle class, thin/athletic build, able-bodied, or ages 30s to early 50s.

Among the oppressed groups, according to the presentation, are people who identify as Black, Asian, Latinx, non-Western European, LGBTQ+, homoromantic, Muslim, Jewish, working class, overweight, or disabled, among others.

DML: The rest of the world is laughing their heads off.

Back in June, the news outlet issued a memo encouraging fully vaccinated staff to include their vaccination status into Workday. The memo noted at the time that employees who might be vaccinated but had not provided that information to the company would be considered unvaccinated under their policies.

In the memo issued on Tuesday and obtained by AdWeek, Suzanne Scott told employees that they would be required to input their vaccination status by the end of that day. The policy pertains to both on site employees and remote workers.

Additionally, Scott noted that select employees in their New York offices would be required to do COVID-19 testing at least one each week, regardless of their vaccination status. The memo also included protocol regarding masking procedures and COVID-19 screening.