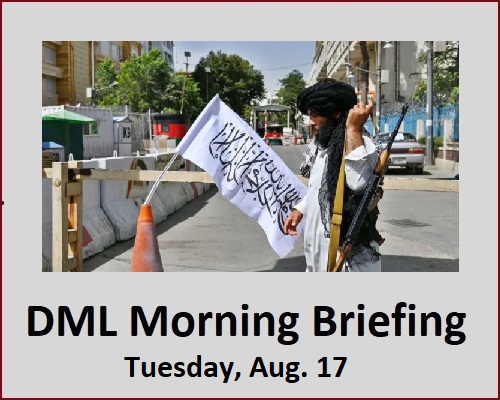 Price cited a United Nations declaration calling for “an immediate cessation of all hostilities and the establishment, through inclusive negotiations, of a new government that is united, inclusive and representative – including with the full, equal and meaningful participation of women.”

Price said that the U.S. government would recognize a potential new government of Afghanistan so long as that government “upholds rights, doesn’t harbor terrorists, and protects the rights of women and girls.” He did not say how the Taliban could convince the U.S. government that it has reformed itself in this way.

Taliban announces ‘amnesty,’ urges women to join government
Tuesday morning, Fox News reported: The Taliban announced Tuesday an “amnesty” across Afghanistan and urged women to join its government, trying to calm nerves across a nervous capital city that only the day before saw chaos at its airport as people tried to flee their rule.

“The Islamic Emirate doesn’t want women to be victims,” Samangani said, using the militants’ term for Afghanistan. “They should be in government structure according to Shariah law.”

DML: What a joke. Anyone who believes the Taliban are going to accept women equally is a fool. Here’s my statement I posted on Facebook last night:

I say: Impeach Biden for his insanely huge level of incompetence. Anyone who voted for this man should be ashamed of themselves. Wake up already! How we get through three more years of this weakness, only God knows. Although Joey has left Afghanistan a mess, don’t overlook the incompetence here at home. Seriously, we’ve got Ms-13, drug runners, human traffickers, potential terrorists using fake IDs, and hard criminals flowing through the southern border without pause, and yet Biden and his team are more focused on so-called domestic terrorists who are also identified as moms who speak passionately at school board meetings.

2 – Former CIA Analyst Zeller: Biden Lied, No Plan to Stop Allies Being Slaughtered by ‘Nazi’ Taliban
Breitbart reports: Former CIA analyst Matt Zeller told MSNBC’s Nicolle Wallace Monday on her show “Deadline” that President Joe Biden lied to the American people during his address on the chaotic evacuation of Afghans that worked with our military over the last 20 years.

On Biden’s speech, Zeller said, “I feel like I watched a different speech than the rest of you guys. I was appalled. There was such a profound bald-faced lie in that speech, the idea we planned for every contingency? I have been personally trying to tell this administration since it took office. I have been trying to tell our government for years this was coming. We sent them plan after plan on how to evacuate these people. Nobody listened to us. They didn’t plan for the evacuation of our Afghan war-time allies. They’re trying to conduct it now at the 11th hour.”

3 – Taliban parades two men through streets with blackened faces and nooses around necks
The New York Post reports: Sickening images show two men being paraded through an Afghanistan street with their faces tarred black — and being pulled by nooses around their necks.

“Taliban accused these men of theft, their faces were colored with black color — to embarrass them,” tweeted Bilal Sarwary, one of Afghanistan’s leading journalists, who said he was sent the images late last week.

The photos show the unidentified pair surrounded by a mob of heavily armed men, many punching the air in apparent celebration as others hold assault rifles aloft.

The men’s faces were both completely blackened, seemingly with a tar-like substance, and both had nooses tight around the neck, which was pulled by at least one in the mob, the images show.

DML: Joe Biden, this is on YOU.

4 – Higher risk of Bell’s Palsy after Sinovac’s COVID-19 vaccine – study
Reuters reports: Aug 16 (Reuters) – The risk of Bell’s Palsy, a type of facial paralysis, is higher after Sinovac Biotech Ltd’s (SVA.O) COVID-19 vaccine CoronaVac, but should not be a deterrent to vaccination, according to a study published in The Lancet Infectious Diseases journal.

“The beneficial and protective effects of the inactivated COVID-19 vaccine far outweigh the risk of this generally self-limiting adverse event,” the study mentioned.

The study involved 28 clinically confirmed cases of Bell’s Palsy after Sinovac’s CoronaVac shot reported among nearly 452,000 individuals who received first dose of the vaccine, and 16 cases after Pfizer/BioNtech’s vaccine detected from more than 537,000 individuals.

“Our findings suggest an overall increased risk of Bell’s palsy after CoronaVac vaccination,” according to the study.

DML: We report the news… you decide.

5 – Jay Cutler Dropped from Uber Eats Campaign for Opposing Mask Mandates in Schools
People reports: Former NFL quarterback Jay Cutler has been dropped from a campaign with Uber Eats after voicing his opposition to mask mandates for schoolchildren amid the coronavirus pandemic.

“Lost a commercial with Uber Eats partnering with NFL,” Cutler, 38, tweeted on Friday. “Was going to film in LA, ‘views aren’t aligned.’ Guess they don’t like future school board members. Frees up my weekend.”

Uber Eats confirmed that Cutler’s views were at odds with those of the company in a statement to PEOPLE.

“We are proud of all the work Uber has done over the last year to help get as many people vaccinated as a possible,” a spokeswoman said. “As such, we prefer to partner with those who support that work.”

“Appreciate the words of support. What I don’t understand is the people verbally attacking me. What happened to unity, acceptance and bringing people together? Seems like that isn’t the case unless I agree with you. Get a shot or wear a mask. Your choice. I will make my choice,” Cutler said in another tweet.