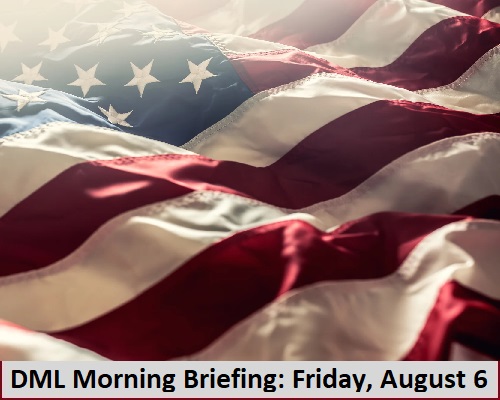 Today is August 6 and I am Dennis Michael Lynch. Below are my opinions on the stories grabbing headlines this morning. I hope you share this briefing as doing so will make you the smartest person in the room, in my opinion.

1 – Denver spends far more on homelessness per person than K-12 students, veterans affairs
Fox News reports: The city of Denver spends at least twice as much on homelessness per person as it does on K-12 public school students – and the spending crushes the veterans affairs budget in the state, a new study released Thursday found, according to a report.

For comparison, the city reportedly spends between $41,679 and $104,201 on each person experiencing homelessness in a year while only $19,202 on each K-12 public school student over the same period of time.

The amount spent on each homeless person in the area is comparable to the average income of area residents. The average rent for a person living in the area is $21,156 per year and the median per capita income is $45,000, FOX 31 of Denver reported.

The Denver metro area spends $481 million on health care, housing and other services for the homeless, according to a report from FOX 31. That amount is also nearly four times more than the budget for the Colorado Department of Military and Veterans Affairs and significantly more than the public safety, labor or employment departments, the station reported.

DML: This is severely messed up!

2 – Mark Morgan: ‘White House and Democrats Are Trying to Pass Through a Mass Amnesty as Part of Infrastructure’
Breitbart reports: Mark Morgan, former chief operating officer and acting commissioner for Customs and Border Protection (CBP), told Breitbart News on Wednesday that the Biden administration and Democrats intend to include a “mass amnesty proposal” for illegal aliens in an appropriation bill marketed by the White House as a “Bipartisan Infrastructure Bill.”

“The White House and Democrats are trying to pass through a mass amnesty proposal as part of infrastructure,” Morgan warned on Wednesday’s edition of SiriusXM’s Breitbart News Daily with host Alex Marlow. “That in and of itself is ridiculous, but they’re also doing it through a complicated, seldom-used reconciliation process. It’s an end-run around needing a 60-vote requirement to get a bill passed [in the Senate].”

He continued, “This is unconscionable. I believe it’s illegal. I believe it goes against the reconciliation requirements, that [the legislation must] have some tangential relationship to spending. That’s the only way it can be part of an appropriations bill, [in this case] specifically infrastructure. It’s absolute lunacy.”

The Hill reports: Senate Majority Leader Charles Schumer (D-N.Y.) is teeing up a Saturday vote to wind down debate on a roughly $1 trillion infrastructure bill, with senators hoping to pass the legislation as soon as this weekend.

Schumer on Thursday night moved to arrange the vote for Saturday, where he’ll need 60 votes to move forward, after a day of behind-the-scenes haggling failed to produce a breakthrough.

3- Virginia school shares ‘Woke Kindergarten’ video: ‘I feel safe when there are no police’
Fox News reports: A Virginia elementary school shared on its website, and then removed, a radical educational video in its summer learning guidance that suggested police are dangerous to be around.

“I feel safe when there are no police,” the narrator says near the end of the 58-second clip, titled “Woke Kindergarten 60 Second Texts: Safe.”

A spokesperson for the Fairfax County Public Schools, just outside Washington, D.C., said the video had been posted by mistake and was removed as soon as officials became aware.

The video had been included in a summer learning guide at Bailey’s Elementary School for the Arts and Sciences in Falls Church along with content related to critical race theory, Black Lives Matter and news articles critical of White parents, according to a report in the Fairfax Times.

DML: If you believe all these claims about this material being inserted “by mistake,” well…. I’ve got a bridge to sell you! Parents have to keep fighting this!

4 – Leftists Blast U.S. Women’s Soccer Star Carli Lloyd for Refusing to Take a Knee
Breitbart reports: Carli Lloyd was one of the few bright spots for the U.S. Women’s National Soccer Team in Tokyo for leading the team in goals and patriotism when she remained standing when her teammates all took a knee.

This brought an avalanche of hate from leftists.

On Thursday, Lloyd became the first U.S. woman soccer player to reach ten goals at the International Games. And it was mostly due to her performance in Tokyo that the USWNT medaled at all when they beat Australia to take home the bronze on Thursday.

But being one of the top female players n the history of the sport was not enough for the woke left, which proved that “gurrl power” is meaningless unless you also adhere to the proper level of wokeness.

5 – China has stolen enough data to compile a ‘dossier’ on every American
The Washington Examiner reports: Top national security officials for former President Donald Trump are sounding the alarm about China’s illicit pursuit of data through cyber theft and other means, with one warning the sensitive information is enough for them to put together a “dossier” on every American adult.

Matthew Pottinger, a former Trump deputy national security adviser, warned during a Senate Intelligence Committee hearing on Wednesday that China was looking to use the data it had stolen from the United States and worldwide to influence and coerce everyone from political leaders to private citizens.

“Assembling dossiers on people has always been a feature of Leninist regimes, but Beijing’s penetration of digital networks worldwide, including using 5G networks … has really taken this to a new level,” Pottinger said. “So the Party now compiles dossiers on millions of foreign citizens around the world, using the material that it gathers to influence, target, intimidate, reward, blackmail, flatter, humiliate, and ultimately divide and conquer.”

Pottinger added: “Beijing’s stolen sensitive data is sufficient to build a dossier on every single American adult and on many of our children too, who are fair game under Beijing’s rules of political warfare.”

DML: And Biden says China is not our enemy!

6 – Here’s something the liberal mainstream media in the US doesn’t want Americans to see… people currently marching for freedom around the world, protesting against vaccine mandates and vaccine passports.