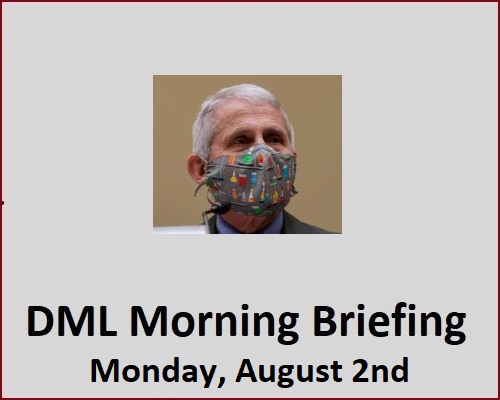 Today is August 2 and I am Dennis Michael Lynch. Below are my opinions on the stories grabbing headlines this morning. I hope you share this briefing as doing so will make you the smartest person in the room, in my opinion. And don’t forget to download the free DML App from the Google Play or Apple App Store to remain connected to me throughout the day.

The report also states that the legislation “also contains roughly $30 billion in cryptocurrency taxes and regulations, which could both kill American jobs and threaten American liberties.”

DML: And that’s just a fraction of this massive disaster.

2 – Silver medalist Raven Saunders raises hands in ‘X’ in Olympic protest, dares IOC to take medal
The New York Post reports: Silver medal-winning shot putter Raven Saunders raised her arms in an “X” formation over her head in symbolic protest while posing for photographers with her co-medalists on Sunday — in violation of the Olympic ban on medal ceremony protests.

Saunders, 25, of Charleston, South Carolina, told the Associated Press the gesture was a nod to “the intersection where all people who are oppressed meet.”

The self-proclaimed “Hulk” of track-and-field is black and openly gay and has been vocal about her struggles with depression. She said she hoped to honor “people all around the world who are fighting and don’t have the platform to speak up for themselves,” the BBC said.

Saunders, a three-time college champion during her time at Ole Miss, made her protest after stepping off the podium during the medal ceremony — in violation of the the International Olympic Committee’s “Rule 50” prohibition on medal ceremony protests.

“Let them try and take this medal. I’m running across the border even though I can’t swim 😂,” Saunders declared on Twitter.

According to a Reuters report, the United States Olympic and Paralympic Committee (USOPC) said in a statement, “Per the USOPC’s delegation terms, the USOPC conducted its own review and determined that Raven Saunders’ peaceful expression in support of racial and social justice that happened at the conclusion of the ceremony was respectful of her competitors and did not violate our rules related to demonstration.”

DML: It’s not about sport anymore.

3 – Washington girl’s lemonade stand shut down by city while complaints continue about homeless encampment
NBC’s King5 reports: EVERETT, Wash — An Everett neighborhood is confused at the city’s priorities after a 7-year-old girl’s lemonade stand was shut down in Rucker Hill Park while complaints over a nearby homeless encampment have gone unaddressed.

“It’s so much fun!” Elsa said. She sold drinks, treats and flowers at her stand until one day her business was shut down due to a complaint.

A park ranger showed up last Saturday and told Elsa and her grandmother, Cherie LaMaine, to close up shop. According to the pair, they were told the city doesn’t allow people to peddle products on public property.

The situation angered neighbors who said they were surprised the city would take the time to shut down a lemonade stand while a nearby homeless encampment continues to cause problems in the community.

DML: Anyone else totally outraged over this??!!

“The bill includes language permitting the Legislative Branch agencies it funds to employ Dreamers … who hold employment authorization under the Deferred Action for Childhood Arrivals (DACA) program,” a summary of the spending bill reads.

The spending bill now heads to the Senate for approval.

DML: Dems have opened the borders, and now they want illegal aliens “in training” in the halls of Congress? The Senate needs to put a stop to this!

5 – Fauci suggests people have no ‘choice’ regarding masks
Fox News reports: White House Chief Health Advisor Dr. Anthony Fauci has rejected the idea that face masks are a “personal choice” in the face of the increasingly severe delta variant of the coronavirus.

The United States on Thursday recorded almost 80,000 new COVID-19 cases – well below the January peak of nearly 300,000 new daily cases, but a stark rise from a month ago when daily cases were under 10,000.

While the number of those cases driven by the more transmissible delta variant is not clear, the CDC advised in early July that the variant was likely the dominant strain in the U.S. The CDC once again advised masks whenever individuals are inside shared spaces, but many people have resisted the call to wear masks, saying they have a right to choose whether to wear one.

“I respectfully disagree with them,” Fauci said on ABC’s “This Week.” “There are things that are individual responsibilities that one has, and there are things that have to do with you individually which also impact others, and the spread of infection that we’re seeing now … is impacting everyone in the country.”

DML: Oh yes, I DO have a choice, and I am NOT choosing your mask, Fauci!