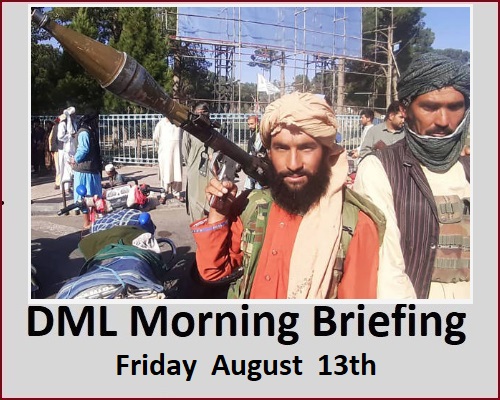 Today is August 13 and I am Dennis Michael Lynch. Below are my opinions on the stories grabbing headlines this morning. I hope you share this briefing as doing so will make you the smartest person in the room, in my opinion.

The insurgents have taken more than a dozen provincial capitals in recent days and now control more than two-thirds of the country just weeks before the U.S. plans to withdraw its last troops.

The New York Times reported that just three major cities in the country are still under the government’s control and Taliban fighters are “well-positioned to attack Kabul.” The paper also pointed out that the capture of Kandahar is a symbolic victory for the Taliban because it is where the insurgency started back in the 1990s.

DML: Biden sucks.  No other way to write it. The NY Times reports that Biden is sending in 3,000 troops to evacuate the Americans who remain in Kabul.  Keep in mind: Nearly 2,500 U.S. troops have been killed and more than 20,500 wounded in the war with Afghanistan since 2001. It’s estimated that over 3,800 U.S. private security contractors have been killed. The U.S. has spent a stunning total of $2.26 trillion on a dizzying array of expenses, according to the Costs of War project.  And in the end it’s all for waste.  Look at the video below of the Taliban opening prisons and letting criminals run free.

2.Extra COVID vaccine OK’d for those with weak immune systems
WASHINGTON (AP) — U.S. regulators say transplant recipients and others with severely weakened immune systems can get an extra dose of the Pfizer or Moderna COVID-19 vaccines to better protect them as the delta variant continues to surge.

The late-night announcement Thursday by the Food and Drug Administration applies to several million Americans who are especially vulnerable because of organ transplants, certain cancers or other disorders. Several other countries, including France and Israel, have similar recommendations.

It’s harder for vaccines to rev up an immune system suppressed by certain medications and diseases, so those patients don’t always get the same protection as otherwise healthy people — and small studies suggest for at least some, an extra dose may be the solution.

DML: Luckily I do not have certain cancers, nor have I had a transplant.  I can’t relate to that sort of thing, and I pray for those folks.  With that said, to boost my immune system I use DML CBD products. They work wonders.  I haven’t had as much as a head cold since I started using the products 30 months ago.  My wife can make the same claim. I’ve never worn a mask, I never social distance, and I have had no jabs.  On a side note, last weekend we were at a crowded bar in Newport, RI.  The place was packed.  People were jammed together, arm to arm, shoulder to shoulder. All of them strangers.   Mary and I feel like a million bucks one week later.  No masks!  Meanwhile, the push for masks in schools, and the push for kids to be vaccinated, are set to push America into a difficult place.

3.Chicago ‘cop killer’, 21, should have been behind bars when he ‘murdered Ella French’ because he had violated his probation with hit and run
Daily MAil – An alleged cop killer was freed on bond following a hit and run four months before the murder – despite being on probation for robbery at the time of the collision.

Emonte Morgan, 21, who police say fatally shot French during a traffic stop last Saturday, has been connected to a hit-and-run case from April in which a walker was struck in a crosswalk and sent flying against a stop sign.

According to ABC 7, Morgan didn’t stop driving until he struck a parked car nearly a mile and a half away. He was freed on a personal recognizance bond in the wake of the hit and run – despite being on probation for a 2019 robbery conviction at the time.  Morgan was still free at the time of French’s death, sparking questions about the city’s soft justice, as Mayor Lori Lightfoot is shunned by Windy City cops.

Police say he exited the vehicle and was apprehended by a security guard. Morgan was taken into custody and later told officers he became distracted while driving because he had been arguing with his brother on the phone. DML: Look above.  Take a close look at the photo of the cop-killing POS scumbag.  And then look at the picture of that beautiful woman Ella French who tried serving her community.  Kim Foxx, the prosecutor in Chicago, is a black, race baiting, useless human being who deserves to be the female in the photo above.  It’s under her leadership that these crimes are allowed to go unpunished, and yet she continues to collect a paycheck and make TV appearances.  I will talk about this today on The DML Podcast.

4. House rental website, Airbnb, shares fall after company reports revenue jump of 300% but warns about delta
CNBC – Airbnb’s stock on Thursday fell more than 4% after the company reported its second-quarter earnings. The company beat Wall Street’s expectations for revenue and bookings but warned about expected volatility from the Covid delta variant.

DML: The reason I add this story is to highlight how the COVID scaredemic crushes growth. Here we have Airbnb kicking ass but it doesn’t matter, the stock drops because Anthony Fauci and radical Democrats in the media scare everyone into believing they’ll die from Delta.  What’s the point of a vaccine?

5.Mayo Clinic: COVID Breakthrough Risk May Be Much Lower With Moderna Than Pfizer
The risk of suffering a breakthrough COVID-19 infection with the delta variant after being fully vaccinated with the Moderna vaccine may be much lower than the risk for those who received the Pfizer vaccine, according to a new Mayo Clinic study that is awaiting a full review.

The study found that in July in Florida, where COVID cases are at an all-time high and the delta variant is prevalent, the risk of a breakthrough case was 60% lower for Moderna recipients as compared to Pfizer recipients.

Similarly, in Minnesota last month, the authors found that the Moderna vaccine (also known as mRNA-1273) was 76% effective at preventing infection, but the Pfizer vaccine (known as BNT162b2) was 42% effective.

DML: Again, why is there such a push for the vaccine when the breakthrough cases are scaling?  Now the new narrative is the risk of death is less with a vaccine.  Either way, the powers in charge are doing everything to force everyone to get vaxxed.  Do you see the scene playing out in Europe where cops are approaching people eating outdoors and demanding a vaccine card?  It’s coming to America.