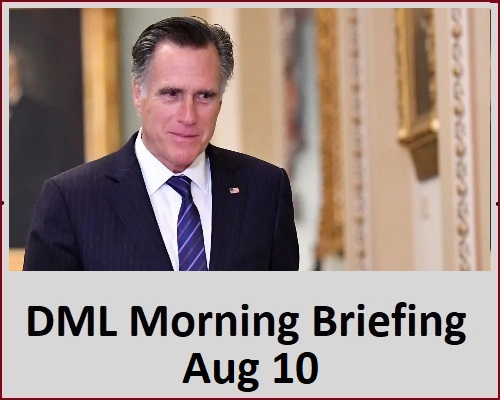 The Hill: The United States is averaging more than 100,000 new COVID-19 cases a day, the highest numbers since last February, before vaccines became widely available.

According to figures analyzed by Our World in Data, COVID-19 cases have averaged more than 100,000 for three days in a row, up about 35 percent over the past week.

Infections have been rising sharply since just after July 4, a spike attributable to the delta variant of the coronavirus.

DML: I guess the vaccines don’t work?  Either way, thank goodness I have a strong immune system.  Do you?

2. Biden’s DOJ caves in to pressure from 9/11 families
The Department of Justice (DOJ) announced on Monday that it will review classified information and documents related to the Sept. 11 terrorist attacks and consider their release, following pressure on President Biden from victims’ families.

Families of victims, survivors and first responders told Biden last week not to attend any memorial events for the attack unless his administration declassifies documents that pertain to Saudi Arabia’s role in the terrorist incident.

The group pointed to a promise then-candidate Biden made on the campaign trail in October, when he said he would direct his attorney general to look into the “merits of all cases where the invocation of privilege is recommended” and “err on the side of disclosure.”

The group said it “cannot in good faith, and with veneration to those lost, sick, and injured, welcome the president to our hallowed grounds until he fulfills his commitment.”

DML: The value of pressure is obvious.  Biden’s embarrassment was enough to push the DOJ forward, so kudos to the 9/11 families.  The question now becomes this… can we trust the DOJ to tell the truth?

3.Florida’s health department says CDC’s COVID count for state is wrong, ‘anticipates’ correction
The Florida Department of Health took to Twitter on Monday to ask the Centers of Disease Control and Prevention to update its COVID-19 case tracker for the state because it incorrectly combined “MULTIPLE days into one,” which made the Sunday daily case count explode to the state’s worst ever.

The department said it follows the CDC’s guidelines for reporting cases. The CDC reported 28,317 new cases on Sunday, which WSVN reported would mark the most confirmed infections in one day in the state since the beginning of the pandemic. Multiple media organizations picked up on the number and the department corrected the stories online with some bite.

“Wrong again. The number of cases @CDCgov released for Florida today is incorrect,” it responded to a report in the South Florida Sun-Sentinel. “They combined MULTIPLE days into one. We anticipate CDC will correct the record.”

The health department said there were 15,319 cases on Sunday, and a three-day average of 18,795. The CDC did not immediately respond to an after-hours email from Fox News about the issue.

DML:  I have told you from the start, this scamdemic is based on voodoo numbers, voodoo doctors, voodoo fear, voodoo, voodoo, and voodoo.  It’s the flu under a different name.  And so with that said, go back to item number one from this DML Morning Briefing. The Hill reported that “the data” shows a terrible spike.  There is no sin in questioning the integrity behind the data.

The Oregonian reported that the governor has seemed to avoid discussing Senate Bill 744. Her move to sign the bill was “not public until recently, because her office did not hold a signing ceremony or issue press release.” The paper also pointed out that the bill was first signed on July 14 but not added into the state’s database until July 29 due to a glitch in the system.

In June, state lawmakers voted to approve the bill that suspended the requirements for students for three years, KATU reported. Foundations for a Better Oregon said in a statement at the time that the bill is intended to “truly reflect what every student needs to thrive in the 21st century.” Supporters of the bill insist that considering math and reading essential skills has been an unfair challenge for students who do not test well. The report said the requirement was first suspended at the start of the pandemic.

DML: I wonder what they’ll be learning instead?  Let me guess, the kids will now see new courses in a woke curriculum that includes topics like “how to identify white privilege,” and “Black Lives Matter”, and “how to get an abortion without your parent knowing at the age of 13,” and “how to tell your friends and family why you chopped off your penis to be a female,” and “Trump voters are vile, how to stop them with baseball bats.”  Look at the videos below from Portland.  That’s the future for the state.

5.Senate Set to Pass Bipartisan Infrastructure Bill Tuesday
WALL STREET JOURNAL —The Senate was set to pass a roughly $1 trillion infrastructure package with broad bipartisan support Tuesday, advancing a central piece of President Biden’s economic agenda that will amount to one of the most substantial federal investments in roads, bridges and rail in decades.

The product of weeks of painstaking negotiations between a bipartisan group of 10 senators and the White House, the legislation both reauthorizes spending on existing federal public-works programs and pours an additional $550 billion into water projects, the electrical grid and safety efforts, among many other projects.

While lawmakers and presidents of both parties have said for years that they wanted to come together on a major package on infrastructure, an agreement consistently eluded them.

With expected passage in the Senate on Tuesday, Mr. Biden is poised to buck that trend, though the bill still faces a potentially rocky path in the House. House Speaker Nancy Pelosi (D., Calif.) has stated she will not take it up until the Senate also passes a separate $3.5 trillion antipoverty and climate plan.

DML: The Republicans who vote YES on Tuesday need to lose their jobs in the next election.  Mitt Romney being one of them.

MY PARTING WORDS: Few things get me happy online.  I hate social media.  But to think of what liberal, radical, actor Tom Hanks must be thinking after his son went on a antivax rant is a smile to my face.  Watch for yourself.  WARNING: Profanity.