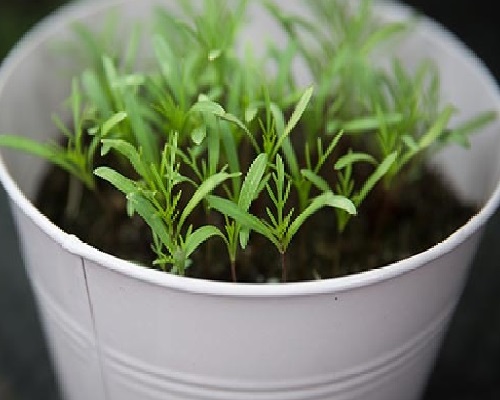 9 vegetables that are the easiest to grow in containers

(Natural News) You don’t need to have a backyard to grow your own food. If you’re limited to a cramped balcony, a small patio or even just a sunny windowsill, you can still grow vegetables. The key is to use containers, such as pots, planter boxes and barrels. You can even recycle old baskets and reusable bags as makeshift pots.

Here are nine vegetables you can easily grow in containers this summer: (h/t to EcoWatch.com)

Kale, lettuce and arugula thrive when grown in containers. Containers also protect them from pests and weeds. They’re best grown in cooler weather but some, such as spinach, collard greens and romaine and leaf lettuce, are tolerant to heat.

Place your containers in a sunny spot but take them out of direct sunlight on hotter days. Take note that potted greens require more water than those grown directly on the ground.

Peas grow well in containers. You can choose between bush or climbing varieties depending on how much space you have. Climbing varieties need a trellis to attach their vines to. You can make your own trellis with all kinds of materials, from sticks to leftover chicken wire or a scrap piece of lattice.

Peas can take up to 70 days to mature, but they require minimal attention while growing. The roots of pea plants are also shallow, meaning you can easily grow them in narrow, shallow containers like window boxes or troughs.

Tomatoes are one of the most popular plants among gardeners because you can grow them virtually anywhere. They’re an extremely rewarding vegetable to grow no matter the space you have. Large containers and hanging baskets are both great options for tomatoes. As long as they get a lot of direct sunlight and support for their stalks, you’ll be harvesting tomatoes in a month or so.

Try smaller, hardier tomato varieties, such as pear, grape and cherry tomatoes. They generally have greater resistance to blights and other fungal diseases that typically afflict tomato plants.

Summer squash comes in either bush or climbing varieties. Both thrive in containers but bush varieties can stay more compact while growing. Give each plant its own pot to avoid crowding, especially if you’re growing a bush variety. The pot should be at least 12 inches deep. If you choose a climbing variety, provide a trellis for support. Summer squash requires about seven hours of sunlight per day.

Green onions have shallower roots than most vegetables, which means they’re ideal for container gardening. Plant the seeds half an inch deep in the soil. If you’re using transplants, make sure the soil covers the white bulb of the onion. Leave an inch or two of space between each plant and keep them well-watered.

Both sweet and chili peppers are easy to grow in containers. They love the sun and grow best in the summer. Peppers also thrive in moist soil, so make sure to water them at least once every day. Their roots will need plenty of room to grow, so plant them in pots that are at least 12 inches in diameter.

Provide a trellis for support. The stems are prone to breakage once they’re heavy with peppers. Bell peppers can be harvested after two to three months, while chili peppers take between two to five months.

Eggplant is another nightshade vegetable that grows well in containers. Because eggplants can get quite big, make sure to plant them in five-gallon pots or containers that are 12 to 14 inches in diameter. Eggplants prefer sandy loam soil, which you can easily make by mixing two parts potting soil and one part sand.

Because eggplants are warm-weather vegetables, they are sensitive to cold. You can grow eggplants in dark-colored pots in cooler climates to retain heat. Bring them inside if temperatures drop at night.

Cucumbers should be planted in large pots because they grow extensive root systems. Some varieties don’t need pollinators to set fruit. But pollinators do help the plants to produce more fruit.

If your cucumber plants are situated where bees can’t reach, such as a screen porch or indoors, you may need to pollinate cucumbers yourself. Here’s an easy guide on how to do that.

Potatoes require a lot of space to grow, so an ideal container would be two to three feet tall with a 10- to 15-gallon capacity. Some varieties can take up to 120 days to mature. If you want a faster-growing variety, try growing seed potatoes. Despite their name, seed potatoes aren’t actually seeds. They’re tubers that you can use to grow new potatoes that will be identical to the parent potato.

Potatoes are ready to harvest when they flower. Dig through the soil for the potatoes. Brush away the soil. Don’t wash until you’re ready to cook them.

Take note that it’s easier to grow vegetables in large containers than in small ones because the former can hold more soil. In large containers, soil also stays moist longer. Make sure containers have drainage holes as well. Many plants grown in containers will need fertilizer as well. (Related: Container gardening tips for the urban prepper.)